Durga Bissa Pendant ₹1,200.00
Back to products
Next product

This product is extremely Pran-Pratishthit,Abhimantrit & Siddh (Energized) during Shubh Muhurat by our Vidhwan Pandit’s

Pandit NM Shrimali explains, according to the Holy Rigveda, the planet Jupiter should be worshipped with utmost devotion. Jupiter is believed to be a kind and affectionate towards its devotees. Pandit NM Shrimali, one of the best astrologers in India says that the generous phase of Jupiter is of a duration of 16 years. A person can observe fast on a New Moon Day (Amavasya) and on Thursdays. Guru Yantra is also called as Jupiter Yantra according to the ancient Vedic Jyotish. Guru Yantra Pendant should be worn to increase the positive effects of the planet Jupiter and to reduce its negative effects. The Guru Yantra is also used to make the Jupiter strong in the horoscope when its effects are positive and to get more benefits from it. Wearing a Yellow Sapphire is considered the best way to strengthen a positive Jupiter Planet. But gemstones should be worn with much caution and they are not the only remedy. Gemstones should never be worn for the planets which are having a negative effect on one’s horoscope as they will increase the strength and negativity of the already negatively working planets in the horoscope and will harm the wearer. Planet Jupiter is also known as the Guru and it is considered as a positive planet in Hindu mythology. Planet Jupiter is the most important planet for the five houses of any one’s Kundali which are the second, fifth, ninth, tenth and eleventh house of the Kundali. It has a positive impact on wealth, fame, success, luck of a person. In a female Kundali, it acts as a planet which causes marriage. Planet Jupiter is believed to be the main planet for Zodiac signs Saggitarus and Pisces.

Shrimali ji says Planet Jupiter is positive in sign cancer and negative in the sign Capricorn. Planet Jupiter takes about one year to pass through the Zodiac sign of a person. Guru Yantra Pendant is very helpful in reducing the negative effects of the planet Jupiter and improves your chances of success.

Guru or Planet Jupiter is considered as the giver of knowledge, wisdom, common sense, wealth and justice. A person who has a negative or a weak Jupiter suffers from various disorders like chest pain, liver disorders and obesity. The positive impact of Guru includes protection from harms caused by diabetes and other disorders.

Planet Jupiter or Guru creates a negative effect when it combines its effect with Rahu and it is known as Guru Chandal Yog. Worship of Planet Jupiter blesses the devotee with good health, wealth and a happy life. It helps in curing physical illness and is very helpful in good education, valour and a happy and long life.

Pandit ji says, establishing a respective Yantra for every planet can be a very effective remedy for reducing the malefic effects of the negative planet. So a Jupiter Yantra or Guru Yantra pendant is very helpful in pacifying the malefic Guru or Jupiter planet in a person’s horoscope. Other than having a rectifying effect against malefic planet Jupiter, establishing a Guru Yantra also blesses a person with the things that come under the influence of Planet Jupiter. A properly energized Guru Yantra should be established as it blesses the native with good results in prospects of education, better financial conditions and an increase in wealth etc, as Planet Jupiter has a direct influence in these matters. A Jupiter Yantra or Guru Yantra aids a person by improving his financial conditions and status.  A Jupiter Yantra Pendant also aids a person who wants to practice spiritual advancement as Jupiter is a planet which can help maintain a perfect balance between spiritual advancement and worldly or materialistic affairs. A Jupiter Yantra can help a person to earn respect in society thereby increasing their social status. It can be useful in helping a person to get a good life partner if the married life of a person comes under the influence of planet Jupiter or Guru.  A Guru Yantra can be established at our home or we can wear it around our neck in the form of a pendant.

A Jupiter Yantra or Guru Yantra can prove to be effective and provide best results if it is properly purified, energized and activated by the means of specific Vedic procedures and performed by an expert Pandit ji.

After having energized your Jupiter Yantra and activated it, it should be installed at home or office. Also, it can be worn around the neck as a Pendant. A Jupiter Yantra or Guru Yantra should be established on Thursday and kept at the pooja sthal of your house or worn as a pendant.

After having a bath, chant the Guru beej mantra 11 or 21 times.

Sprinkle some holy water or unboiled milk on the Jupiter Yantra.

Pray to Planet Jupiter or Guru Planet and ask to bless you your specific or desired results.

Then establish the Jupiter Yantra in your house or wear it as a pendant around your neck. To get the best results from the Guru Yantra Pendant, hold it in your hands after having a bath, concentrate on it and chant the Beej Mantra of Planet Jupiter 11 times and ask your desires from it. A strong relationship or contact between you and your Guru Yantra can be established if you regularly worship your Guru Yantra with devotion.

The Guru Yantra is gifted to the disciple by the guru for worshipping and getting blessings for good health and rise in wealth, professional or educational status. It’s importance is-

It helps in reducing the negative effects of the malefic Jupiter and providing positive effects.

It helps in curing diseases such as heart attack, diabetes.

This helps in blessing a person with good fortune.

Guru Yantra can be used for good knowledge and financial prosperity.

What according to the scriptures:

According to Hindu scriptures and mythologies, Lord Brihaspati is also known as Deva-Guru. The Guru blesses his devotees with wisdom, intelligence and teachings about religion, philosophy, and morals of unity. The Guru Yantra if kept at home and worn as a pendant blesses the devotee with happiness, wealth and prosperity.

Be the first to review “Guru Yantra Pendant” Cancel reply

Rated 5.00 out of 5
₹1,200.00
Weight: 2.5-3 gm, Material: Pure Silver, Shape: Round This product is extremely Pran-Pratishthit,Abhimantrit & Siddh (Energized) during Shubh Muhurat by our Vidhwan Pandit’s Also available in GOLD with Hallmark | Also attach any Gemstone with Pendant
Add to wishlist
Add to cart
Quick View
Sale 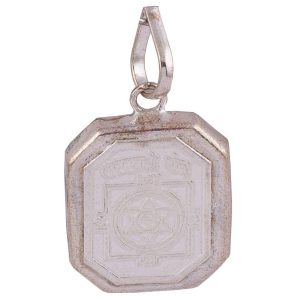