Ardhanareshwara is a hermaphrodite deity composed of Lord Shiva and his consort Devi Shakti, representing the amalgamation of male and feminine vitalities. According to various scriptures, entirety in this Universe originates and creates from Ardhanareeshwara and goes back into Ardhanareeshwara after the conclusion of its lifetime. The Samkhya texts state that there are two distinct fundamental everlasting entities: the Purusha and the Prakriti. Ardhanareshwara Narmadeshwar Shivling

Hindu mythology is the representation of equality between man and women, where Lord Shiva gives equal importance to Goddess Parvati. The concept behind Ardhanareshwara is that the whole universe is made up of Prakruti and the Purusha – male and female personifications. Ardhanareshwara Narmadeshwar Shivling represents the same iconic Lord Shiva and Parvati. It says the dancer who appears in a costume that shows half his body as Lord Shiva and another half as Goddess Parvati. In this piece, the dancer uses delicate and graceful movements to show the Parvati and more energetic and powerful movements to show Shiva.

The Devi Bhagwat Purana says that Shiva worshipped and meditated on Adishakti for thousands of years. She incarnated in front of him in the form of Sidhidatri, from the left half of Lord Shiva. The Purana mentions Parvati, the Goddess of power and beauty, which is considered her Sagun Swaroop. That is to say, Parvati is seen as the purest material form of the Deity.

Ardhnareshvara personalizes the dissolution of religious strains and the acceptance of a more holistic, all-embracing worldview. Ardhanareshwara Narmadeshwar Shivling signifies “totality that lies beyond duality”, that Deity is beyond the organization of male and female. It unites all the contrasts of the Universe. It signifies two conflicting ways of life that are needed for life to be created and invented. So, none can exist without the other. It likewise answers the question as to why a wife must always sit at the left-hand side of her husband. The wife traditionally sits to the left of the husband. The left side is the location of the heart and is connected with feminine characteristics like intuition, creativity, and awareness, while the right is associated with the brain and masculine traits – logic, courage and systematic thought.

Across principles, hermaphrodite facts like Narmadeshwar Shivling have traditionally been associated with fertility and abundant growth. In this form, Lord Shiva in His eternal embrace with Prakriti represents the eternal reproductive power of Nature, whom He regenerates after she loses her fertility. The Shivling is the symbol of lord shiva and Ardhanareshwara Narmadeshwar Shivling is a symbol and sign of Lord Shiva and Goddess Parvati.

Laxmi Charan or Lakshami Paduka is a rare Lucky Charm

Small Surya Face Hanging Mask which is a representation of Lord Surya.

₹499.00
Weight:  50 gm, Material: Ceramic This product is extremely Pran-Pratishthit,Abhimantri & Siddh (Energized) during Shubh Muhurat by our Vidhwan Pandit’s For good luck and wealth, Ganesha Shankha should be kept in the worship area.
Add to wishlist
Add to cart
Quick view
Sale

Rated 5.00 out of 5
₹1,499.00
Weight:  200 gm, Material: Coconut This product is extremely Pran-Pratishthit,Abhimantri & Siddh (Energized) during Shubh Muhurat by our Vidhwan Pandit’s
Add to wishlist
Add to cart
Quick view 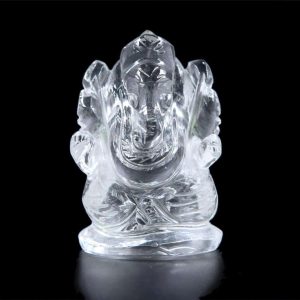 Rated 4.50 out of 5
₹899.00
Weight:  30 gm, Material: Copper This product is extremely Pran-Pratishthit,Abhimantri & Siddh (Energized) during Shubh Muhurat by our Vidhwan Pandit’s Shree yantra the most powerful of all yantras is depicted here in a three dimension form or “Meruprushtha”.
Add to wishlist
Add to cart
Quick view
SaleSold out

Add to wishlist
Add to cart
Quick view
SaleSold out

This beautiful statue is extraordinary of brass metal which gives you religious feeling.